Halloween in the English capital produced a brand-new monster this year, in the shape of a 40-tonne fatberg. The sewer-dwelling horror show was removed from Greenwich in East London on the 31st of October. To put its weight into perspective, the blob weighs more than three famous London red buses, or 666 festive pumpkins (CREEPY, RIGHT?!).

You’ve got to hand it to them

The brave, strong-stomached workers of Thames Water removed the massive blockage by hand. The monstrous blob took three weeks of manual labour to be removed. High-power water jets were used to break up the fatberg, and the smaller more manageable pieces were removed by hand. Eight brave men worked nine-hour shifts for three full weeks, finally finishing on Halloween night. No tricks, certainly no treats.

The 40-tonne blob was taking up 80% of the available sewer space. Had evasive action not been taken, the fatberg would have backed up into streets, homes and businesses, according to Thames Water. Matt Rimmer, Thames Water’s head of waste networks, added:

This was a massive and disgusting blockage that took a great deal of effort and teamwork to clear and get the sewer working well again… I’m happy that our team was able to get down and work hard to quickly clear the fatberg before it could cause problems for our customers and the environment.” 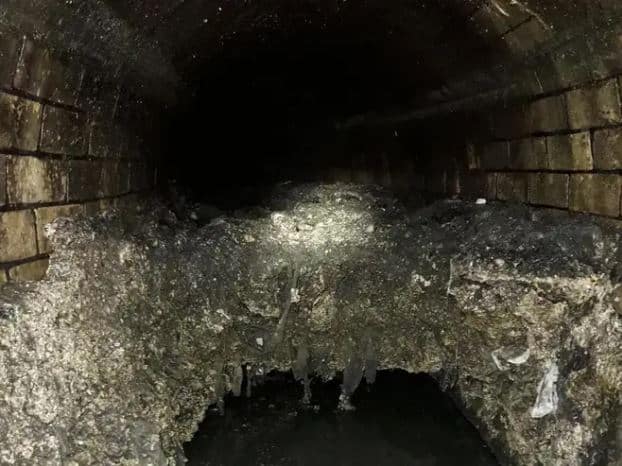 Unfortunately, this fatberg finding is not a one off. In London, it’s becoming a bit of an epidemic. For a city with commendable green initiatives, its problem with fatbergs is ongoing. This 40-tonne monster is dwarfed by previous discoveries, including a record 130 tonne fatberg found underneath Whitechapel earlier this year. This behemoth is an example of how London’s fatberg problem hasn’t going anywhere, yet.

Water services describe the occurrence of a fatberg like a snowball effect. Flushed wet wipes congeal with fats, oils and grease (FOG) in the sewers to create a real-life nightmare. Not only is removal a nasty process for the workers involved, the damage to infrastructure costs taxpayers millions a year. Our sewers and oceans are heavily hurt by the environmental impact of our actions, too. Just because we can’t see the monsters, doesn’t mean they’re not there.

By changing our habits, we can work together to eliminate fatbergs, save money and help to protect the planet. For more information and advice on how your kitchen can help make a difference, please contact us HERE.