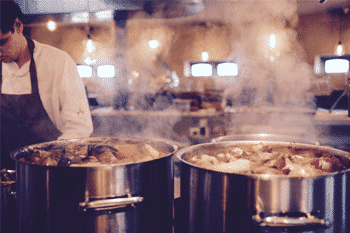 Whether you own a restaurant, a small pub, a multi-storeyed hotel or a supermarket, a significant part of the food waste generated in your facility is FOG. These fats, oils, and greases are a high-lipid waste and an untapped source of hydrocarbons that can be chemically treated to produce biofuel. And to most of the commercial kitchen owner’s surprise, this valuable food waste can be converted to biofuel in your own facility.

Governments in many parts of the world have revealed the advantages of collecting trapped grease before it enters the sewage system. In fact, a number of countries and city laws have mandated grease generators to collect the waste and treat it in an eco-friendly manner. So in one way where grease collection is an obligation for commercial kitchens, in the other way it is a profitable opportunity.

Let’s get to know more about the FOG to fuel journey in detail to make your catering business more productive and responsible.

How Can Grease Be Used In Biofuel Production?

Researchers have successfully found out efficient ways to convert yellow grease (cooking oils) to biofuel. Now even the brown grease (FOG) is being identified to have environmental and financial benefits. Biofuel production through grease is one of the most attractive future applications. As a result, research is going on to improve the efficiency and the ease of the conversion process.

Trapped grease is characterised by high amounts of free fatty acids (FFA). Considering its composition, the most commonly used conversion method is to treat the grease with an acidic methanol solution (acidic catalyst). In turn, this solution converts FFA to methyl esters which are then proceeded by a conventional base-catalysed transesterification method.

To optimise the reaction of FFAs by an acid catalyst, response surface methodology is applied. A university restaurant obtained 95.3% conversion rate (best rate) with acid catalyser (1.5% w/w oil/4 h) and the grease at 70 °C and a molar ratio of 1:9 (oil/alcohol).

The chemical constituents of trapped grease may vary from one kitchen to another. Yet, this conversion technology can be used to accomplish the process.

Dave Hubbard, a DIYer in West Virginia converts grease (bought from local restaurants) to biofuel for his modified BMW motorcycle, a black Jetta TDI, bulldozers and tractors of his local farms. His success is the result of his eight years of efforts in experimenting with biofuel production. So, if you are willing to give a potential diversion to your catering business, you could choose to reuse your kitchen grease into biofuel production.

Grease, if allowed to flow down the drainage line, can harden the pipes and pick up other materials along the way, creating large solid chunks of muck that hurt your pipes and your wallet. To prevent this, food service industry can use grease separation devices such as grease traps or grease interceptors.

Specifically, considering the biofuel production, the grease collected by grease traps is the biggest source of raw material. Grease traps are the most potential grease recovery units that collect the FOG and food waste from the aqueous waste streams. Depending on the size of the catering business and the number of dishes cooked, commercial kitchens require to install grease traps with capacity as small as 50L or as big as 7570 L. Going forward, at regular intervals when grease is emptied from the grease trap, it can be sent for biofuel production.

Grease generated in kitchens is the cheapest and biggest resource available for biofuel production. Therefore, in many countries, biofuel production companies pay a good amount to restaurants, hotels, supermarkets or any other commercial building – to purchase the grease collected in their grease trap units. Other prominent advantages include:

Biofuel production is not just a profit-making opportunity for the foodservice industry but at the broader level, a contribution to the environment, health and economy of the nation.

Grease Guardian is the leading grease trap manufacturer that designs premium quality grease trap units for the pretreatment of the FOG. According to reports, the most efficient grease interceptors are the one that can collect at least 90% of the FOG generated. And Grease Guardian products are designed to match the highest optimality – more grease collected means more raw material for the production of biofuel.

X15 is one of the smallest capacity grease interceptor unit from Grease Guardian that can meet the requirements of small food service businesses. The stainless steel unit is designed for sinks and ovens. It is an automatic system that traps grease and removes it through skimming program. The unit comes with a removable side access solid basket and a spray bar for cleaning. Get the detailed information from here. 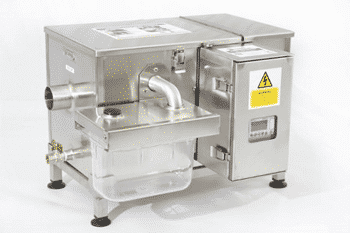 X50 is a high-capacity grease trap unit designed for large volume sinks. Its features and the operating system is the same as that of X15. It is an automatic grease separation unit with an audio alarm, motion sensor, aeration device and frames. Get the additional specifications from here.

Grease Guardian’s mission is not just manufacturing premium quality and efficient grease traps. Part of its mission rests on the fact that it aims at preventing the sewer systems and our dear environment from getting degraded. So in this major contribution from the Eco-Guardians, install a grease trap unit and become an eco-partner now.