A Fatberg that blocked a high street hairdresser’s toilets was so big that it stretched the full length of the high street in Cheltenham….now if that isn’t reason for concern over the state of our drainage systems what is?

Engineers spent eight hours unclogging the slimy blockage in Cheltenham last month.  At first the fatberg was thought to be a concrete slab blocking the sewer it was that solid but workers instead found it was solidified fat which they dug out with spades.  This was back breaking and unpleasant work to say the least.

The FATBERG was discovered after staff at the hairdressers found they couldn’t flush toilets.  Pictured is the stomach-churning image of the fatberg found under the upmarket town within Cheltenham which is so big that it is blocking people’s toilets. 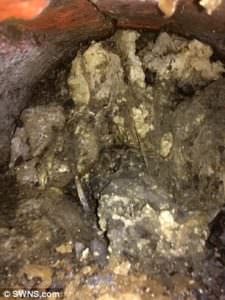 The sewer was full to the brim and threatened to send sewage and other foul material spilling out onto the streets.  The ‘fatberg’ was on the Post Office Lane and was discovered after a water company received a complaint from hairdressers that staff couldn’t flush the toilets.

These fatbergs are created by dumping waste oil and fats and grease down the kitchen sinks and drains.  It is an extremely common issue and we at Grease Guardian continually try to advise and educate businesses as to the dangers of this bad habit.  It’s easy to assume that the warm grease and fat left over from cooking would be ok to dump down the sink, but that is defiantly NOT the case.  As soon as the oils and fat go down the drain and cool, the become rock solid and stick together and create a fatberg which blocks the drains.

It is much easier to install a Grease Trap and keep your drains FOG free.