Isn’t it awkward when an unwanted visitor decides to lodge with you over the holidays? They invade your space, annoy everyone and stink the whole place up. Then again, you did invite them.

South Jamaica, Queens in New York are currently experiencing a similar issue. But it’s not the in-laws coming to occupy the basements, it’s fatbergs. 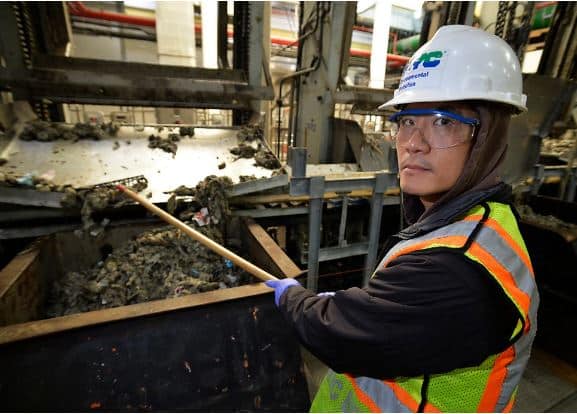 To recap; a fatberg is the monstrously messy result of congealed fats, oils and grease (FOG). Cooking oils poured down the drain combine with a whole host of improperly disposed-of items such as wet wipes (even the ‘flushable’ kind). The result is a whole heaving mess. Fatbergs wreak havoc on the environment and cost millions in tax-payer money each year for their removal. Fatbergs don’t discriminate- they’ve been popping up all over the world, although some cities are repeatedly feeling the effects.

82 homes based in South Jamaica, Queens woke up to the unpleasant sights and smells of raw sewage last week. The New York Department of Environmental Health have identified the cause; a fatberg causing issues 40-metres below the surface.

The monstrous blob had formed and clogged a 42-inch pipe in the sewers, forcing an unholy amount of waste and sewage water upwards and into the basements of hundreds of devastated residents. Many residents did what they could to fight against the water, using techniques including cheap pumps to try and undo the damage.

However, the water proved too much for residents and council workers alike. The sewage began flowing into houses on Saturday morning, and continued to gush into the streets on Sunday. Many residents had to evacuate their homes due to the toxic level of stench rising from their basements. In the mouth of Christmas, already battling severe snowstorms, many residents have been left distraught and pondering the path of least resistance in recovering from the horror show.

Red Cross have opened a station nearby the incident to help out as best they can. Providing “a safe warm place for residents” who have been put out of their homes is a tremendous act so close to Christmas. Spokesperson Desiree Reiner added:

“We are providing case workers to help residents file claims on damage and we will shelter up to 100 people if needed. We are working with the city to find a new shelter to house anyone else who needs it, but we are still working on it”.

City of New York Mayor, Bill De Blasio, commented on the incident “I think we’re all learned to just expect the unexpected”. The lesson we should take from this is that fatbergs, although often not in sight, are a serious threat lurking beneath us.

For more information on how to deal with fatbergs, check out our fatberg survival guide. For more information and advice on how your kitchen can help make a difference, please contact us HERE. This festive season, we urge you to consider your behaviours in disposing of cooking grease. But most importantly, happy holidays from everyone at Grease Guardian.