What is the best grease trap?

There are many factors to consider when choosing the most effective Grease Trap for you! 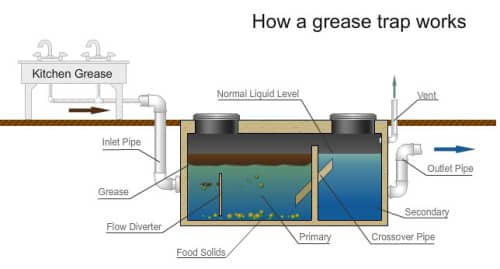 But I have no space for a grease trap

A bigger tank though better at retaining grease has the disadvantage of being too big to fit under sinks. You would need to install this grease trap in the ground or in a basement usually at a distance from the source of the grease. If these options are not available then the smaller under sink grease trap is still available as an option. If an under sink grease trap is installed then it is likely to fill up with grease much quicker than a bigger tank. This means emptying the grease trap will be much more regular resulting in more disruption to kitchen activities.

At least once a month? You can’t be serious!

One of the greatest weaknesses of the conventional grease trap is the reliance on pumping companies to completely empty the trap. Most standards for grease trap indicate that once or twice a month is the requirement. However, city ordinances have their own opinions. Some push for larger grease traps with less frequent pump out requirements others use the rule of thumb that requires emptying to be carried out when the tank is 25% full of grease but this might be difficult to check. Emptying a grease trap every month can prove costly. Many owners of grease traps wait until the authorities tell them to empty the trap or until there is a blockage or smell. Inspecting grease traps on time is a  struggle for most  authorities who usually rely on records kept by the restaurant owner of regular de-sludging.

And if I don’t empty it? Then what?

As a grease trap fills up with grease and sludge then the available volume for grease to separate is reduced. Consequently, grease starts to go down the drain. Though grease traps might be installed in every restaurant, if they are not emptied on time then they will continue to allow grease down the drain. For the restaurant owner this could result in blockages. The authorities might trace any municipal blockages back to the restaurant and demand to see pump out records. Depending on local legislation, a fine may follow or worse, the restaurant could be closed down.

There are many forms of dosing grease with chemicals, enzymes and bacteria. Enzymes are a good method of removing grease from a grease trap but the problem is further downstream where the “treated” grease reforms. Bacteria can reduce grease by “digesting” the fat, however, bacteria can be easily killed through the use of detergents and hot water.  A restaurant using dosing will need to keep buying more bacteria/enzymes every month before the grease builds up.

So, should I go automatic?

Automatic grease removal units are typically an under sink grease trap with a method of removing the trapped grease and sludge on a daily bases. This ensures that the trap remains efficient as the waste is extracted on a daily bases. A properly maintained automatic grease removal unit ensures compliance and this is both good from the end users point of view but also from the authorities point of view. Because GRUs have mechanical and electrical parts they do however need servicing like any equipment. Failure to service a GRU may result in the system under performing.

If you have plenty of space and are prepared to empty the grease trap every month regardless of cost then the bigger the better! If space is an issue then under sink options are available. To keep pumping costs down and to ensure efficiency levels are maintained then automatic grease removal units are probably a better option than small under sink passive grease traps particularly in busy kitchens. Dosing should be considered when there simply is no space for any reasonably sized grease trap. Always check with your local authority’s code of practice.

Please do not hesitate to contact us for more information.